A new study led by a research team from Massachusetts Eye and Ear and Harvard Medical School describes how bacteria adapted to the modern hospital environment and repeatedly cause antibiotic-resistant bloodstream infections. Infections acquired by hospitalized patients are more often antibiotic-resistant than those that occur elsewhere, and hospitals invest considerable effort to prevent them. Despite best efforts, some bacteria are able to persist and circulate among patients, causing repeated infections. This study examined one of the first sustained hospital outbreaks of a multidrug-resistant bacterium, Enterococcus faecalis, which occurred from the early through the mid-1980s, causing over 60 outbreak strains. 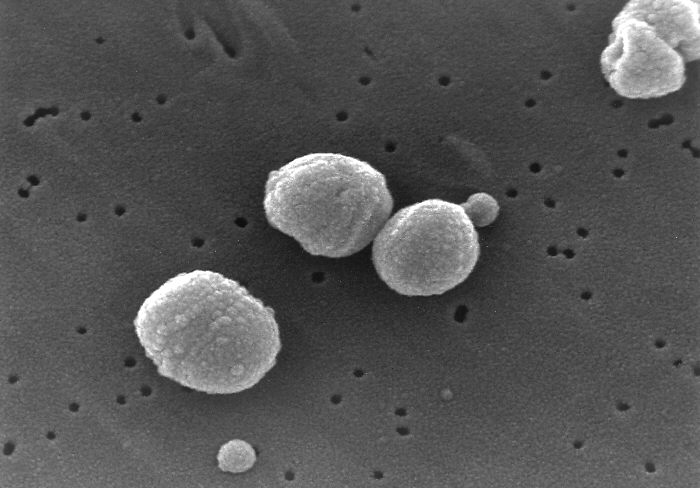 The study, published online April 10 in Science Translational Medicine, was led by a research team headed by Michael Gilmore, PhD, Senior Scientist at Mass. Eye and Ear, and the Sir William Osler Professor of Ophthalmology, and Director of the Infectious Disease Institute in the Department of Ophthalmology at Harvard Medical School. The team compared the DNA sequences of bacteria that had been archived from the outbreak 30 years ago by collaborator Mark M. Huycke, MD, infectious disease specialist now at the University of Oklahoma Health Sciences Center. Spearheaded by Gilmore laboratory research associate Daria Van Tyne, PhD, and with the help of Broad Institute Scientist Ashlee Earl, PhD, the researchers identified mutations in the bacteria as they caused one infection after another over 4 years.

The study’s authors hope the novel findings on how enterococci infect the bloodstream will help scientists and physicians develop new ways to prevent these infections from happening, and to better treat them when they occur.

“Knowing how the microbes outsmarted the body’s immune system and antibiotics tells us what is critical to the microbe in order to cause infection,” says Dr. Gilmore. “This in turn gives us a clearer shot at new targets for developing the next generation of antibiotics, and for guiding their careful use inside and outside of hospitals.”

Naturally occurring in the human gut, enterococci bacteria can lead to infections including bloodstream and urinary tract infections, infections of surgical sites, and endocarditis — infection of the heart valves.

Researchers examined the genomes of the bacteria to analyze samples from an early outbreak of bacteremia in patients in a Wisconsin hospital between 1984 and 1988 that was caused by multidrug-resistant Enterococcus faecalis in order to learn how they adapted to existence in the hospital and transmission from one patient to another. By going back to the early days of the antibiotic resistance problem, Dr. Van Tyne, Dr. Gilmore, and colleagues were able to see that Enterococcus faecalis entering into the bloodstream first turn on an unusual pathway that allows the microbe to make a new substance that helps to shore up its cell wall. This makes the bacterium more able to resist being killed by white blood cells, and also by antibiotics of the penicillin class that attack the bacterial cell wall. The authors also saw that in the middle of the outbreak, the types of adaptations suddenly changed, and the bacteria began to reinforce their cell walls in a new way. This change corresponded to the introduction and widespread use of a then-new antibiotic, called imipenem.

Dr. Van Tyne, now an Assistant Professor in the University of Pittsburgh Department of Medicine, was able to repeatedly recreate the exact change 30 years later in the laboratory, using an imipenem class antibiotic, demonstrating the link.

“Our study shows how an enterococcal outbreak lineage emerged and evolved over an extended hospital outbreak and how outbreak strains responded to host immune selection and changing antibiotic regimens,” says Dr. Van Tyne. “These findings highlight new pathways that could be further leveraged in the future for control and management of hospital-acquired enterococcal infections.”

Antibiotic resistant infection is a leading threat to public health worldwide. It has been estimated that by 2050, more people could die from infections that are no longer treatable with antibiotics, than from cancer. Understanding how some bacteria have been able to overcome our natural immune defenses, and new drugs as they are introduced, is the key to preventing a future where up to 10 million people could die each year from antibiotic resistant infection, according to Dr. Gilmore.

“This research study is a powerful example of how scientists like Dr. Gilmore are utilizing new genetic technologies and molecular biology to uncover new and important information about drug-resistant bacteria, so we may better understand, and ultimately prevent and treat life-threatening infections,” says Joan W. Miller, MD, the David Glendenning Cogan Professor and Chair of Ophthalmology at Harvard Medical School, Chief of Ophthalmology at Mass. Eye and Ear and Massachusetts General Hospital, and Ophthalmologist-in-Chief at Brigham and Women’s Hospital.

kiran
Hello guys, myself Kiran and I am a Health advisor in Sagar Apollo Hospital. I am passionate towards healthcare. In my website you can see health tips, Fitness tips for beginners, diet and nutrition tips and lifestyle of Pregnancy. Thanks for visiting.

Columbia University scientists, in collaboration with researchers from Nimbus Therapeutics, have demystified a metabolic enzyme that could be the next major molecular target in cancer treatment. The team has successfully determined the 3D structure of human ATP-citrate lyase (ACLY) — which plays a key role in cancer cell proliferation and other cellular processes — for […]

How to Get Rid of a Sore Throat Fast Overnight?

A sore throat has its own ways of making you regret that cold drink or oily snack you had the previous day. It can be worse if you have a presentation at work or an important family gathering the next day. It mostly will strike you after dusk that it is getting worse and force […]

Does sugar directly feed cancers, boosting their growth? The answer seems to be ‘Yes’ at least in mice according to a study led by researchers at Baylor College of Medicine and Weill Cornell Medicine. Their study, published in Science, showed that consuming a daily modest amount of high-fructose corn syrup — the equivalent of people drinking […]